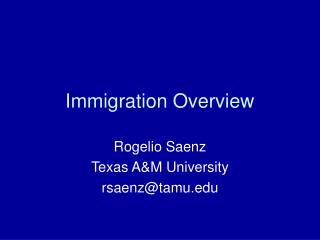 Immigration Overview. Rogelio Saenz Texas A&M University rsaenz@tamu.edu. Introduction. The U.S. has long been a country of immigrants Waves of immigration associated with flows from different parts of the world Movement of capital and products across international borders NAFTA

Overview of US Immigration and Immigrant Integration May 31, 2008 Jeanne Batalova - National center on immigrant

US immigration law is complex, with many different categories for different kinds of people. - Overview of us immigration

IMMIGRATION - . process of moving from one country to another permanently. immigration to the u.s. started after the

Immigration Then and Now - . an economic perspective. production possibilities. with more labor. a historical

Immigration Unit Vocabulary - . vocabulary quiz on friday. migration. the process of relocating to a new region.

Immigration Review - . what do you call people who move to the u.s. from another country?. immigrants. problems or hard

What is Immigration? - . immigration is the movement of people from one country or region to another in order to make a