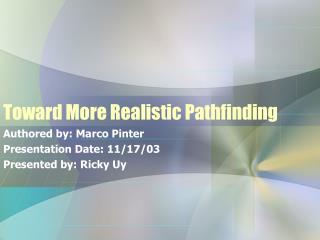 Toward More Realistic Pathfinding. Authored by: Marco Pinter Presentation Date: 11/17/03 Presented by: Ricky Uy. Background – A*. Commonly used in video games Finds a path from start to goal, if one exists Pathfinding - . “pathengine is a sophisticated middleware tool-kit for the implementation of intelligent agent

AI Pathfinding - . representing the search space to perform pathfinding , an agent or the pathfinding system needs to

Moving More Toward Digital? - Are you making waves and shaking up your curriculum . moving more toward digital?. 2012