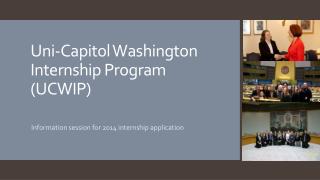 State of Wyoming Capitol Upgrades and Renovation projects - . photos of the skylight and lighting project will be shown

Making the Difference - . jobs in federal service. agenda. part 1: opportunities and benefits a job for every interest

Educational Opportunity Centers Program 2005 Pre-Application Workshop Washington, DC July 12, 2005 - . how did we get