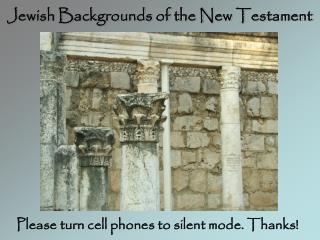 A Brief History of the Jewish State - . from property of the sovereign. …to a sovereign state. jews in the middle ages

Old Testament Timeline - . benjamin s. heath. “to every thing there is a season , and a time to every purpose under the

Searching For The Sinner’s Prayer In The New Testament - . introduction. it is common for people who want to be saved,

Topics Already Covered - . signs indicating we are in the last days. our nations need to return to god. the end times

NEW TESTAMENT FOUNDATIONS  NT 102 - . the beginnings of the gentile church. galatians introduction theme: what does it

TITLE: The Excellence of Worship - . text: i chronicles 28 theme: the ministry of music was gods idea so we might honor