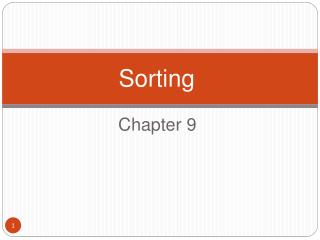 Sorting . Chapter 9. The efficiency of data handling can often be increased if the data are sorted according to some criteria of order. The first step is to choose the criteria that will be used to order data. Sorting - . suppose you wanted to write a computer game like doom 4: the caverns of calvin… how do you render those

Sorting - . order in the court!. importance of sorting. sorting a list of values is a fundamental task of computers -

Sorting - . unit summary. students will explore characteristics of objects and attributes that distinguish one object

Sorting - . introduction. why is it important where to use it. topics of discussion. simpler methods (faster coding)

Sorting - . sorting is the process of arranging a list of items in a particular order the sorting process is based on

Sorting - . chapter 9. the efficiency of data handling can often be increased if the data are sorted according to some

Sorting - . chapter outline. how to use standard sorting methods in the java api how to implement these sorting

Sorting - . selection sort (basic). find the smallest element move to the front of the array (swap with front) repeat

Sorting - . we will be sorting records based on some key. the records will be stored in “global” memory. we will