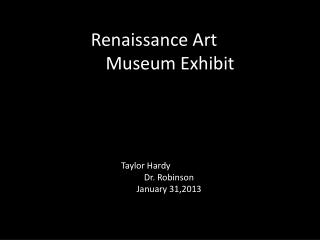 Inside the Trump Museum - The "trump museum," just steps from the republican national convention, displays

Deaf Artists Exhibit - . funded by the national endowment of the arts, vsa arts, southeast texas arts council and the

Famous Art Museums - . the louvre, the prado, the alte pinakothek , and the uffizi. the Museum Vocabulary - . exhibit noun. an object or collection of objects displayed for the public. curator noun. person in

Chapter 13 The High Renaissance and Mannerism in Italy - . culture and values, 8 th ed. cunningham and reich and