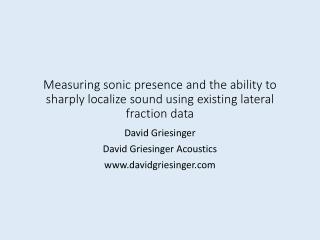 DAVID - Aring to use new technology. image comes from: click here. vid learner of technology. david. ery excited to use

David - . about me. my name is david jestříbek. i am 13 years old. i am from kutna hora in the czech republic i live a

David - . by amy calleja. since king saul disobeyed god. god told samuel to go to jesse’s house and called his sons and

David - . all about. hockney. david hockney is a british artist well known for painting, printmaking and photography. we

David - . saul is foolish. saul rejected by god. samuel anoints a new king. who is it lord?. god looks at the heart.

David - . learning review. i think i have improved my teamwork skills from year 5 my handwriting has improved a lot. i

David - . a man after god’s own heart. where we have been. israelites ask for a king saul anointed king saul

David - . test. david test. what is the title of this piece? death of marat tennis court oath the lictors bring to brutus