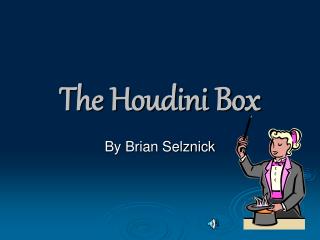 The Houdini Box - . by brian selznick. vocabulary. houdini is a magician. person who writes for magazines. person

Houdini - . houdini. introduction. about us the research problem the proposed solution one language for the web

Harry Houdini - . the king of hand cuffs . by: nate blouin . introduction. harry had two sons with his wife bess harry

Harry Houdini - . the man and his magic. the baby is coming. born on march 24,1874 in hungary, budapest. facts

Harry Houdini - . b y michael . harry houdini was born on march 24 1874 in budapest hungary. he was named ehrich by his

Who was Harry Houdini? - . by: eamon mott. what was harry houdini’s real name?. a. ehrich weiss b. r.j. armstrong c.

Mysterious Phenomena: Harry Houdini - . brent kempton. introduction. who. what. he escaped from safes and locks. he once

from Spellbinder: The Life of Harry Houdini - . day 1 can you believe your eyes?. warm up- p. 850. media smart. watch

The Box - . problem : write an interactive program to compute and display the volume and surface area of a box. the