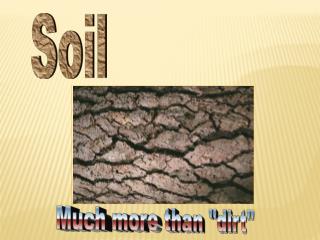 Soil. Much more than "dirt". Why is soil important?. Soil is the growing medium for our food Without it we could not survive Soil purifies our waste Soil is home to plants and animals It may take up to 100 years to form one inch of topsoil

Soil - . introduction. soils are a fertile, natural resource. soils develop / form from the weathering of rocks in one

Soil - . all you wanted to know but were too afraid to ask… …. this is a soil profile. it shows the different layers

soil - . is defined as the top layer of the earth’s crust. it is formed by mineral particles, organic matter, water,

What is a soil pedon ? - . a pedon is a natural body of soil that is large enough to allow classification of the soil.

On Good Soil: Pastoral Planning for Evangelization and Catechesis with Adults - . [some] seed fell on good soil. it came