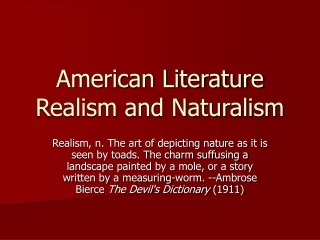 American Literature Realism and Naturalism. Realism, n. The art of depicting nature as it is seen by toads. The charm suffusing a landscape painted by a mole, or a story written by a measuring-worm. --Ambrose Bierce The Devil's Dictionary (1911). Realism. Realism in American Literature 1865-1914 - . lecture objectives. to gain an overview of the historical context and

An American Literature Project - . how country-western music perpetuates the american tradition by peggy lant. the themes

American Realism 1850-1914 - . mrs. crandall american literature. what is realism. response to the civil war rejection of