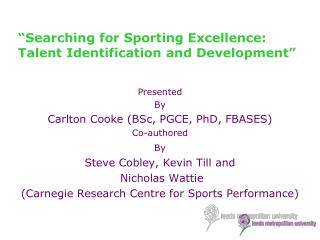 2012 EXAMINER TRAINING The Criteria for Performance Excellence - . presented by the granite state quality council and the

QAPI - . achieving a culture of excellence. objectives . to demonstrate an understanding of how to use the elements of

A Scientific Basis for Talent Identification and Elite Player Development October 2006 - . questions we asked…. is

ELITE SQUADS - . date 1: structure all actions in each region date 2: identification of coaches and officials to