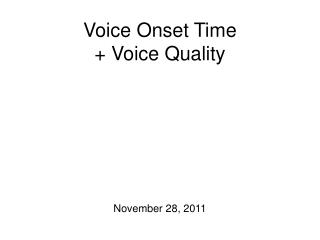 Voice Onset Time + Voice Quality. November 28, 2011. The Future. Production Exercise #3 is due. This week: the basics of obstruent acoustics On Wednesday: cues for place of articulation. On Friday: more spectrogram matching. Next week: sonorant acoustics approximants and nasals

Recognition of Voice Onset Time for Use in Detecting Pronunciation Variation - . project description what is voice onset

VOT is necessary but not sufficient for describing the voicing contrast in Japanese - Lsa 2009 january 10. vot is

Week 6: Clinical Problem of a Hoarse Voice - . hoarseness results from imperfect phonation due to impairment of normal