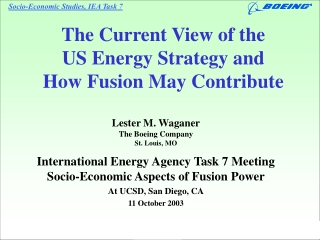 FUSION FOR ENERGY The European Joint Undertaking for ITER and the Development of Fusion Energy - . welcome. c/ josep pla

Fusion Power Associates Annual Meeting “Countdown to Ignition and Gain” December 3, 2008 - Search for a “yes we

Socio-Economic Aspects of Fusion Energy - Learning from the past to build a brighter future. socio-economic aspects of

ECO -Fusion - . c. the next generation in. sr. (corporate social responsibility). are you and your company c onstantly

MHD for Fusion Where to Next? - . jeff freidberg mit. current status of fusion mhd. some say there is nothing left to do