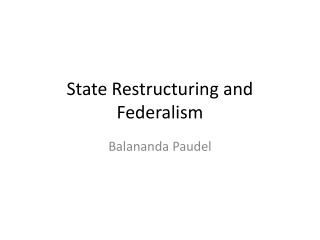 Federalism and Lawmaking - . a parallel and dual system. the u.s. constitution establishes a government based on

Fundamentals of Federalism - . how the circle and the squares get along. defining federalism. federalism : a system of

Econ 508 Presentation Federalism and the M-form Hypothesis - . how the study of comparative economic systems relates to