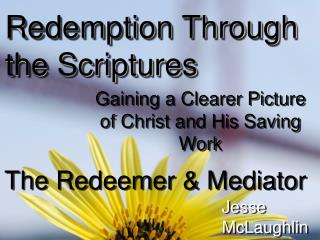 Christ the Redeemer, Rio de Janeiro - . one of the new 7 wonders of the world. song: corcovado (quiet nights) sung by:

- There is a redeemer, jesus godâ€™s own son precious lamb of god, messiah holy one thank you o my father, for

The Mediator’s CREED Ethical Considerations for Selecting a Mediator and Participating in a Mediation - . presented by:

I know that my redeemer liveth - . khinckley1@yahoo.com. things to know about job. many think the book is

My Redeemer Lives - . i know he rescued my soul his blood covered my sin i believe… i believe my shame he’s taken