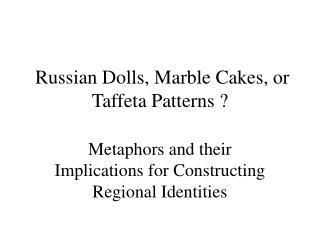 Russian Dolls, Marble Cakes, or Taffeta Patterns ?. Metaphors and their Implications for Constructing Regional Identities. Structure of my talk. Part 1: Metaphors of identity and how they affect our understanding of discursive identity construction

Welcome to a Russian Wedding - . how does a russian engagement look like ?. in america, when two people are being

reading &amp; understanding code - . experts are better at code comprehension because they focus on higher level