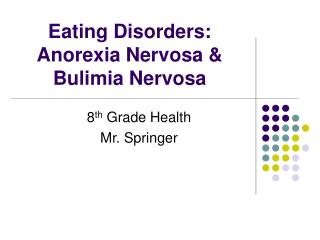 Bulimia Nervosa - . cristian pelaez. definition. a condition in which people would eat large portion of food at one time,

The Perils of Eating Disorders - . eating disorders are conditions defined by abnormal eating habits that may involve

No Body is Perfect - . a variety of individuals from all walks of life have disordered eating or an eating disorder. just