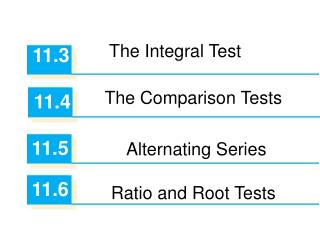 The Integral Test. 11.3. The Comparison Tests. 11.4. 11.5. Alternating Series. 11.6. Ratio and Root Tests. Definition of Convergence for an infinite series:. Let be an infinite series of positive terms. The series converges if and only if the sequence of partial sums,