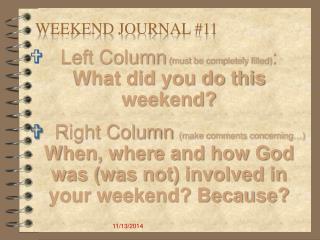 WEEKEND JOURNAL #11 . Left Column (must be completely filled) : What did you do this weekend? Right Column (make comments concerning…) When, where and how God was (was not) involved in your weekend? Because?.

10 Amazing things to do this long Eid weekend in the UAE - The holy month of ramadan is going to end, and people in uae https://freemp3download.club/the-weekend-sad-frosty-mp3-song-download/ - The weekend mp3 song you can request a free

WEEKEND JOURNAL #5 - Left column (must be completely filled) : what did you do this weekend? right column (make comments A Weekend of Discovery… - . a lifetime of love! take special time away to rekindle the fun and passion in your marriage

The Last Word: No Homework…have a great weekend. - Frontpage: turn in map activity to back box. what is one thing that

WELCOME BACK FROM THE LONG WEEKEND! - . bell ringer: grab a book from the shelf and read! be ready to share something you

My last weekend - . last saturday, i got up early and i had a small breakfast because i went to work. then i cooked lunch

Best Weekend Ever!! - One of the best weekend's i've ever had thanks to solid research and my good friend