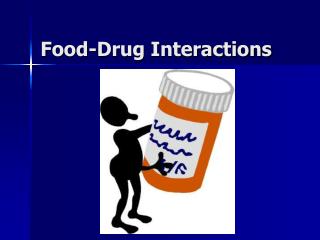 Food-Drug Interactions. Definition of Terms. Drug-nutrient interaction: the result of the action between a drug and a nutrient that would not happen with the nutrient or the drug alone

An Introduction to Food - . section 1. what is food security and why is it difficult to attain?. many people suffer from

Just say no to drug reps - . the physician-pharmaceutical industry relationship. are you drug company dependent?. if