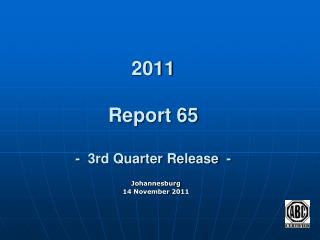 The Financial Vulnerability of South African Consumers during the Second Quarter of 2011 - . contents. introduction

3 rd Quarter—Heading for the Finish Line! - Congratulations to the following students who were 2nd quarter’s top 10

WEND Update - . wendwg 3. 3 rd meeting held may 13-14, 2013 guidelines for the implementation of the wend principles enc

SoE 2011 – Overview - . this presentation was developed as one of several australia state of the environment 2011 (soe