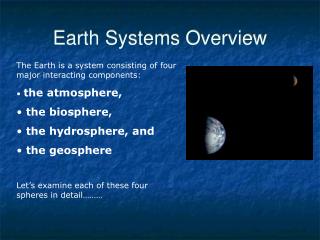 Earth Systems Overview - . the earth is a system consisting of four major interacting components: the atmosphere, the

Systems, Cycles, Spheres - . an overview of how the earth works. discussion questions. what is a system? include a

The Geosphere - . honors biology chapter 3. definition. the solid part of the earth, including all rock, soil, and

Earth as a System - . essential question: how does the earth work to be a system?. system. definition: a group of

The Earth Now: The Oceans The Atmosphere The Surface/Crust The Biosphere - Phys 575/csi 655: intro to atmospheric physics

Earth System Science - . the soar-high project teacher: ms. mary ellsworth . what is ess?. the study of the earth and

What is the Earth System? - . the atmosphere (air) extends up from the earth surface for several hundred kilometers. the

MAP PROJECTIONS - . present by : nidal aburajab. basic definitions. geodesy - the shape of the earth and definition of