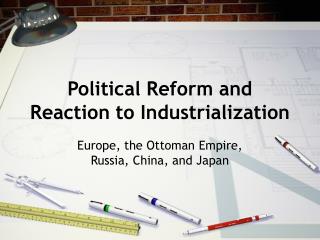 Political Reform and Reaction to Industrialization

Political Reform and Reaction to Industrialization

Progressivism and the Age of Reform - . this political cartoon shows president theodore roosevelt as a hunter who’s

The Progressive Movement - . a major purpose of the progressive movement (1900–1917) was to (1) stimulate the economy

The Romantic Period - . 1780-1830. the romantic period. a more daring, imaginative, and individual approach to life and

The Industrial Revolution - . the age of steam. what was the industrial revolution?. was a period from the 18th to the Problems with the Rise of Industrialization - . by lizz lagatta and natalya kadziauskas. urbanization. overcrowded tenets