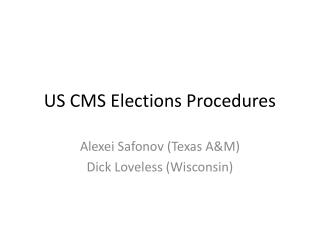 US CMS Elections Procedures. Alexei Safonov (Texas A&M) Dick Loveless (Wisconsin). Motivation. These discussion points have arisen from our experience running the last US CMS elections Elections went well, but there were instances when we had to make up rules on the go US elections - . what is the name of the current president of the united states?. is he a democrat or a republican?.

US Elections - Legal provisions. the system of elections into federal offices is governed by a combination of federal and

Physics in US CMS - . us cms annual collaboration meeting may 2002 fsu jin branson. outline. review of the last year us