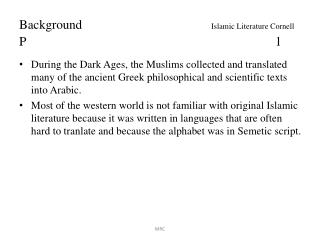 Background Islamic Literature Cornell P 1. During the Dark Ages, the Muslims collected and translated many of the ancient Greek philosophical and scientific texts into Arabic. Chris Cornell: 1964 - 2017 - Musician chris cornell, who gained fame as the lead singer of soundgarden and later

English Literature - . 郧阳师专英语系英美文学精品课程. the 18th century the age of enlightenment in

Please... - ...fill out all sections marked with ** while you wait. please. kindly turn off all cell phones and