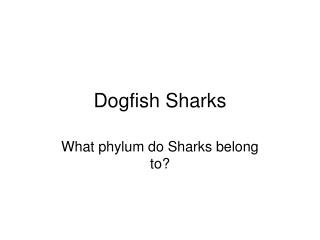 Dogfish Sharks - . what phylum do sharks belong to?. characteristics of life of phylum chordata, class

Spiny Dogfish - . by: nathalie, alondra and erick . what does this animal look like?. the spiny dogfish’s sides are

Sharks - . by: john . sharks belong to the class of fish, chondrichthyes . some sharks lay eggs and some give live birth.

Sharks - . shark facts. too many

Sharks - . shy ocean creatures?. anatomy of a shark. sharks belong to a family called chondrichthyes. the members all

Sharks - . shy ocean creatures?. sharks are cartilagenous fish. what parts of the human body are made of cartilage? ears

Sharks - . by: andreas. habitat:. sharks live everywhere in the world some sharks like hot water and some like cold

Sharks - . my favourite animal is the white shark. sharks are very interesting animals and they are huge,too: (6-8 m, 2

Sharks - . are not bloodthirsty, killing machines…. how long have sharks been around?. 400 million years!. how long do

Sharks - . by: kristian. tiger sharks. they are found in tropical areas (hawaii). they live alone in shallow waters. they