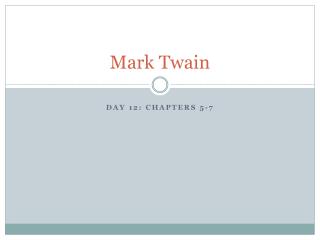 Mark Twain - . satire, sci-fi, and the sacred. “he is sid in tom sawyer. but sid was not henry. henry was a much finer

The Adventures of Tom Sawyer -by Mark Twain - . background knowledge. what do you know about the author mark twain?. on

Mark Twain - . day 7 &amp; 8: chapters 1-4. do now. predict which character above will be most interesting. explain

Luck Mark Twain - . goals. content goal- we will work on theme, cause and effect, and evaluation of