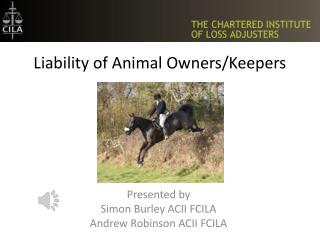 Liability of Animal Owners/Keepers. Presented by Simon Burley ACII FCILA Andrew Robinson ACII FCILA. Animals on the Highway. Animals on the highway. Innocent motorist strikes animal. Is there a liability in:- a) negligence b) Animals act 1971 If so who is liable:- Owner? Keeper? .

Public Adjusters - There are many types of the adjuster. the public adjusters assist you how you can retrieve your money

The Breach That Wasn't - . two truths and a lie. please fill out the table below with two statements that are true and

“I Am My Brother’s Keeper” - . council membership chairman. how to be successful. successful chairman will :. know Animals bite - Overview . about half of all persons will incur an animal bite sometime in their life. not all bite wounds

Liability Of a Limited Company - An llp-like organization structure is available globally. all partners have liability of