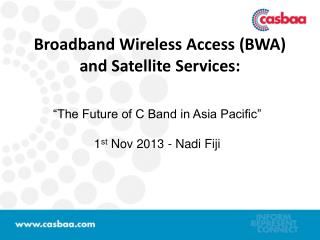 Satellite Based Broadband in Nigeria, Prospects and Challenges - The 2013 e-nigeria conference on it local content

Security and Wireless Together at Last - . three things often missing from your wireless robert neuroth, regional

The Shortcut to Broadband - . recognized worldwide as the best in the industry. free space optics or “fso”.