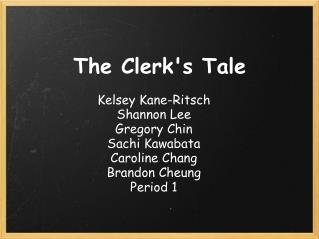 “The Pardoner’s Tale” - . by geoffrey chaucer. the pardoner. he is a fraud sells fake religious relics to poor

Role of the Clerk as Comptroller As Interpreted by the Courts - . fccc winter conference jacksonville, fl january 30,

Clerk Accounting Structure of the Office - . presented by: stacy butterfield, cpa clerk of the circuit court for polk

The Lawyer’s Tale Type of tale: Religious - . by: bria hicks and rachel franklin. prologue. you are in poverty, but it

The Tale of Sir Thopas - . heere bigynneth chaucers tale of thopas and made grace woo. character of sir thopas. he grew

The Winter’s Tale : Magic, Art, and Belief - . the first half of the winter’s tale, we said, is like a tragedy, or,