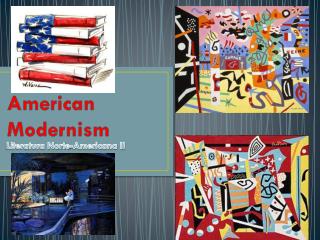 Allan enjoying the Mooserwirt in St Anton - . darran and american steve in the journey's end, challaborough. the american

Modernism unit - . begins on 11.18 campolmi. objectives 11.18 . summarize key historical events and how they relate to

REALISM TO MODERNISM - . the times—1850 to wwi. the world was on the move across borders (this included the great

Rise of American Power - . emerging global involvement. in the late 1800s and early 1900s, american expansion was in many

HISTORY OF AMERICAN SPORT - . the history of u.s. sport. ancient games -baggataway/lacrosse arrival of the europeans -

CHAPTER 28 THE AMERICAN CENTURY - . the american nation: a history of the united states, 13th edition carnes/garraty.