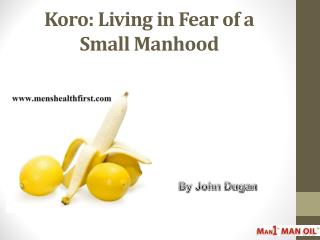 Too many men live in fear of having a small manhood, when skill and member health are far more important. Koro refers to an irrational belief that oneâ€™s manhood is shrinking. Chapter 28 - . protists. overview: living small. even a low-power microscope can reveal a great variety of organisms in a

Small Groups: Wave of the Future - . how to organize and run small groups. hi. my name is pen cil, and i’ll be your

Quick Write: How does your public image differ from your private self? - Quick write: what is your greatest fear? how did

The Twenties - . birth of the modern. postwar developments at home. the years after the “war to end all wars” are

The Living World - . what is the biosphere?. the biosphere is the layer around the earth containing all living organisms.

Living on a Budget How to make the most of your VISTA Stipend - . budgeting. write it down. write down everything that

Diversity of Living Things - . 2.2 viruses p. 54-59 nelson biology 11. what is a virus?. microscopic particles capable of

The Quest for Authentic Manhood - . “saddle up!” for the second half session 14. vision is critical to

Statistics - . a word on statistics - wislawa szymborska. led to error by youth (which passes): sixty, plus or minus.

HOPE and FEAR - . today and tomorrow. he always . he always wanted to explain things but no one cared so he drew