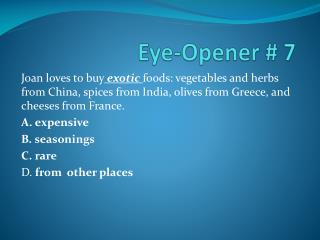 Eye-Opener # 7. Joan loves to buy exotic foods: vegetables and herbs from China, spices from India, olives from Greece, and cheeses from France. A. expensive B. seasonings C. rare D. from  other places. Eye-Opener #8.

OPENER - . have you ever wondered why flamingos are pink or orange? you've probably heard it has something to do with

Welcome to the Spring Reception! - . the year in review – cynthia archer mines update the eye-opener - library

Surveying the Stars - . insert tcp 5e chapter 15 opener. properties of stars. our goals for learning: how do we measure

Opener - . pick up a note packet from the side counter describe a force (what does it do? what is it?). newton’s 1 st

Things to Get: Handouts from the table One piece of notebook paper - Homework in the box! (principle drawing activity)

17 Sept - . opener: what does it mean for a molecule to be polar?. agenda talk about test water stations whiteboard

Chapter 13 - . the structure of the atom. what do you think atoms are? what do they look like?. opener - atoms . what is

Chapter 13: Economic Challenges Opener - . essential question. how much can we reduce unemployment, inflation, and

Chapter 5: Supply Opener - . essential question. how do suppliers decide what goods and services to offer?. guiding

FIFA World Cup 2014 starts in Brazil - The world cup started in brazil this week among celebration and protests. the host

Chemistry - . hydrogen. session opener. what do you understand by word “hydrogen” ?. hydrogen in greek means water