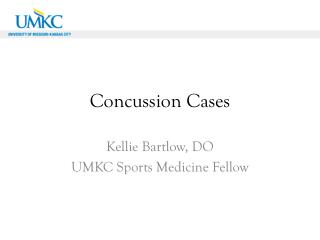 Concussion Cases. Kellie Bartlow, DO UMKC Sports Medicine Fellow. Case 1: JF. JF is a 17 year old wide receiver During a Friday night game, JF complains to the ATC of headache and sensitivity to stadium lights after being tackled. JF: History.

Concussion Treatment And Speech Therapy - 1. be on the journey to wellness after concussion with these tips 2. how

THE PATIENT WITH CHRONIC MULTIPLE LESIONS - . patients with chronic multiple lesions are frequently misdiagnosed for

Neuropathology I - . main elements of the cns and their basic pathologic reactions. neurons marked variations in size and

RECOGNITION They may feel nauseous, dizzy and weak - Fainting. children are particularly susceptible to fainting.