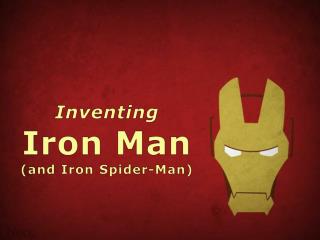 Inventing Iron Man (and Iron Spider-Man). Iron Man. Billionaire industrialist Tony Stark suffers a severe chest injury during a kidnapping in which his captors attempt to force him to build a weapon of mass destruction.

Physical science - . first quarter eqt. which of the following: francium, calcium, titanium, or iron, is the most

BUZZWORDS! - . iron curtain. the political, military, and ideological barrier erected by the soviet union after wwii to

10 Misconceptions Your Boss Has About Tyme Iron Pro Reviews - Hair straightening is a costly affair. having a

Ancient Chinese Inventions - . world cultures . entry task memo books. looking at your notes from yesterday: which of the