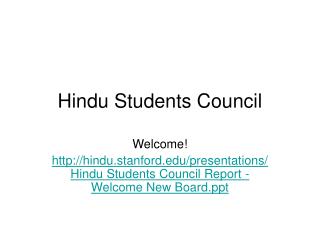 Fun with Fragments - . exploring sentences and sentence fragments. a sentence is a group of words that expresses a

THE HINDU STUDENTS COUNCIL PRESENTS RABINDRA JAYANTI 2005 CELEBRATING TAGORE - . where the mind is without fear and the

Welcome to Tufts Hindu Students Council - . [2011-2012]. our mission. providing opportunities on campus to learn about Hindu Swayamsevak Sangh A Journey - . global presence, growth and origins. what is it? vishwa mangala hetave.

Hindu - Hinduism has neither a specific moment of origin nor a specific founder. rather, the tradition understands

Aim: What does it mean to be Hindu? - . do now : what do you know about hinduism? what would you like to know?. ny state

Mandala Project An Artistic Representation of Hindu Beliefs - . student examples…. directions. side one: you will draw

Celebrating 95 years - . the diocese of bradford was created out of part of the original diocese of ripon . st peter’s

Blast in Bangkok - A motorcycle bomb explodes outside a hindu shrine, killing several, including foreign