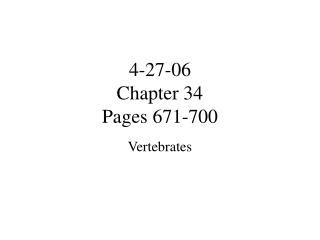 4-27-06 Chapter 34 Pages 671-700. Vertebrates. Overview: Half a Billion Years of Backbones. By the end of the Cambrian period, some 540 million years ago a n astonishing variety of animals inhabited Earth’s oceans No 06. Chapter 4 - . consumption, saving, and investment. introduction. chapter 3 considered the “supply side” of the

Chapter 27 Section 4 - . the terms of peace. the fourteen points. president wilsons idea that by joining the war america

CHAPTER 34 - Click your mouse anywhere on the screen to advance the text in each slide. after the starburst appears,