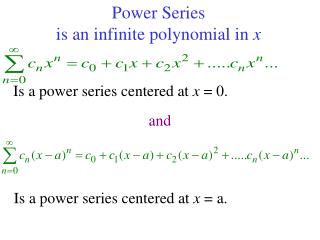 Power Series is an infinite polynomial in x

Power Series is an infinite polynomial in x

The Binomial Theorem - . patterns in binomial expansions. by studying the expanded form of each binomial expression, we

Convergence of Taylor Series - . objective: to find where a taylor series converges to the original function; approximate

Power Series - . radii and intervals of convergence. first some examples. consider the following example series:. what

Sequences and Series - . andrew taylor alec seco. basic sequences. sequence : a function whose domain is a set of

Section 8.8: Taylor Series - . (so cool it needs its own theme music). recall . this is valid on the interval of

Taylor Series and Taylor’s Theorem - . when is a function given by its taylor series?. so where were we?. facts: f is

Error Approximation: Alternating Power Series - . what are the advantages and limitations of graphical comparisons?