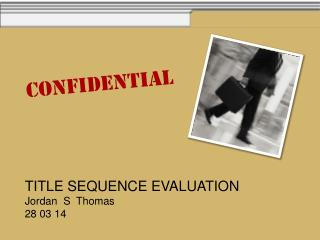 Confidential. TITLE SEQUENCE EVALUATION Jordan S Thomas 28 03 14. Q- 1 How does my product challenge, develop or use the forms and conventions of real media products? . Q- 1 [Narrative and Genre] Warm up 03-28-14 - . question: for every action… answer: there is an equal and opposite reaction goal: i will learn to

Opening Title Sequence - Disordered. opening title sequence. by michael, a maia and e mil. where we got our ideas from.

2014-03-14 - Railway policy in finland. finnish railway passengers‘ association has applied to eu about the finnish