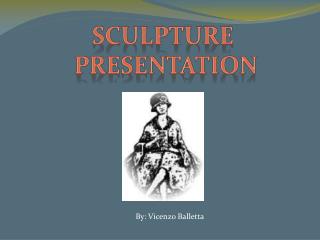 Sculpture presentation. By: Vicenzo Balletta. Charlotte Rhead:. I chose Charlotte Rhead, because she had great ceramic art designs . When I started searching I saw her amazing and beautiful pots .

Mixed Media Sculpture - . *anything in red must be added to your notes for sketchbook research. sculpture. the art of

Sculpture Basics: “Eye” Get It! - . name: date: per: sub:. three-dimensional. an object that has height, length

Sculpture - . http://www.slideshare.net/kccartprofessor/kcc-art-211-ch-11-sculpture-presentation. ceramics. one of the

My Sculpture! - . by emily hansen. what it's about. i decided to do a sculpture that included: the environment marine

Ice Sculptures - . or over glass ?!. ice and snow sculpturos in http://superiorplatform.com. more sculptures

Cardboard Sculpture - . think outside the box. series of events. while viewing the images write down potential ideas you

SCULPTURE - . sculpture:. art that is made to occupy space . it is 3d. 3-d three dimensional:. an object that has

Relief Sculpture - . “relief sculpture is any work which projects from, but which belongs to, a wall, or other type of

Sculpture &amp; Masks - . name: per: date:. three dimensional art. artwork that has all sides on view.