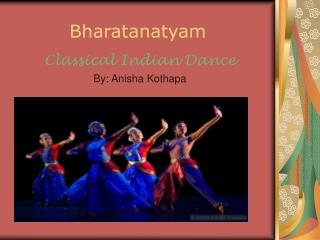 Bharatanatyam. Classical Indian Dance By: Anisha Kothapa. Intro. to Bharatanatyam. It is a classical dance form originating from Tamil Nadu, a state in Southern India. It is one of the five major styles of dance in India. Other dance styles include Odissi, Kuchipudi, and Kathak. .

Kerala Classical Dances - Kerala is one of the best states of india for its culture and tradition. the people of this

Belly Dance Belts - Belly dance belts are made of fully stone and thread works. when belly dancers wear and dance it

Natya – The Spirit of Dance By Apsara Asia and Maya Dance Theatre Pre-Show - . why dance?. think-pair-share when was

How does self awareness effect dance? - . day 1. circle time how is everyone feeling strength and weakness in dance class

Bharatanatyam - . alankar pratham pariksha. the concept of sanchari in bharatnatyam practice. terminology and meaning of

Periods of Classical Music - . classical music is art music rooted in the traditions of western music. . romantic and 20

Bollywood Dance - . indian dance. who in this culture dances it depends on the dance specific dances danced traditional:

Prehistoric , Ancient Art and Egyptian, Classical, and Medieval Art - . senior exam 2012 visual art one. this is an