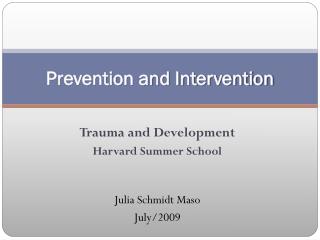 The McKenzie Method - . an overview mechanical diagnosis &amp; therapy of the spine: a dynamic system of examination,

Social Determinants of Health and Equity: - . addressing the root causes of health disparities. levels of health

From Screening to Functional Assessment: A Response to Intervention Model - Comprehensive, integrated, three-tiered

PREVENTION “An ounce of prevention is worth a pound of cure”! - . prevention lecture outline why prevention?

Seniors and Crime Prevention - . national crime prevention council 2007–2008. goal of this presentation. to examine the

Prevention Psychiatry What is it? - . group for the advancement of psychiatry committee on prevention, 2006-2007 david