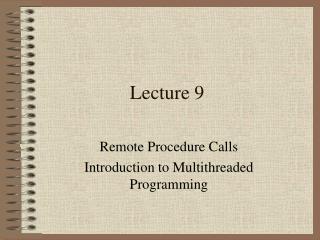 Lecture 9 - . dimitar stefanov. recapping. dc and ac instrumentation amplifiers:. errors due to the capacitance of

Lecture 9 - Combinatorics. the branch of mathematics studying the enumeration, combination, and permutation of sets of

Lecture 9: - . past perfect tense shift. past perfect. used to: i. express an action which took place before another