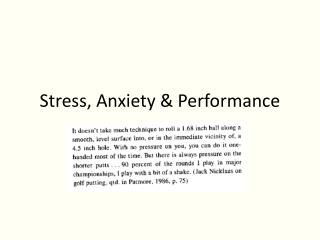 Stress, Anxiety & Performance. Definitions. Arousal Stress Anxiety State Trait Cognitive Somatic Physiological Arousal Activation. What is somatic anxiety, how does it differ from physiological arousal, and does this make sense? (note: William James thought deeply about this in 1890).