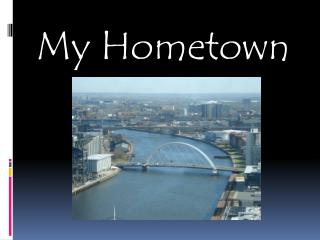 My Hometown. I’m Alice,. I’m 15 years Old. And this is my story. “Bang! Bang! BANG!” It’s the mail man! I opened the door and took my letter! It said Dear Miss Donald Your Mother, Ming has been confirmed as Guilty and is in jail for 8 years! Your sincerely, The High Courts

Welcome to my hometown Shanxi - . inland province not far away from shandong. vinegar.  indispensable in our diet 

My hometown : AALST - . what’s in a name ?. there is no certainty about the meaning of the name &quot;aalst“.

My Hometown PLEVEN - . pleven is the seventh most populous city in bulgaria. it is a major economic centre of the

My hometown - . today ,i will introduce you some on my hometown a beautiful country in the sichuan province and i know

MY HOMETOWN - Port dickson is located in the state of negeri sembilan in peninsular malaysia. my hometown. port dickson

My Hometown - . o r village. basic facts. a place where i live can be: big or small? is it a village, town, city?

My Hometown Presentation - . by: lou montante comm 115 october 26, 2010. bushkill, pennsylvania. where there is always