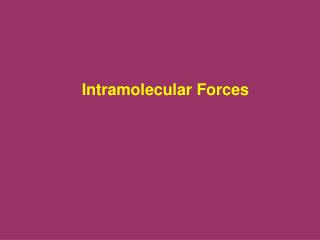 Intramolecular Forces. Is the Molecule Polar?. We have already talked about diatomic molecules. The more Electronegative atom will pull the electron density of the bond Closer to itself giving it a partial negative charge leaving the other Intramolecular and Intermolecular Forces - . intramolecular forces - the forces between atoms or ions inside a compound