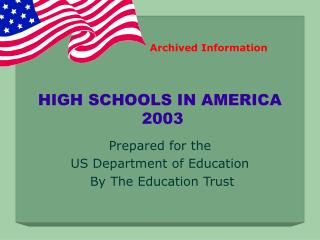 Achievement In America - . where are we now? key facts on the achievement gap. elementary literacy middle school math

High Schools: Why Are They So Hard to Improve? - . karin chenoweth eagle county public schools august 10, 2010. before we

Arizona (Including Charter Schools) High School Survey - . among students who rode a bicycle during the past 12 months,

(c) 2003 Wadsworth Group All rights reserved - Provincial america and the struggle for a continent. (c) 2003 wadsworth