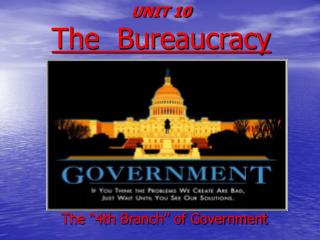 UNIT 10 The Bureaucracy. The “4th Branch” of Government. A. The large and complex organization of UNELECTED (hired & appointed) officials of the Executive branch who are charged with running the day-to-day operations of gov’t. I. WHAT EXACTLY IS THIS “BUREAUCRACY” THING?.

UNIT 10 The Bureaucracy - . the “4th branch” of government. the large and complex organization of all unelected

Service Management: WHAT - . our goals: one service desk for cern ( one number to ring, one place to go, 24/7 coverage)

The President and the Executive Branch - . requirements to be president. must be at least 35 years old native born

Quizlet! - . rick santorum, former senator (r-pa), current presidential candidate!. if you can identify this person, give