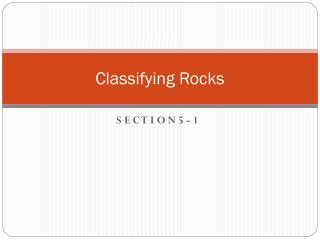 Classifying Rocks. S E C T I O N 5 - 1. Objective. What characteristics are used to identify rocks? What are the three major groups of rocks?. Earth’s crust is made of rock. Rocks are mixtures of minerals and other materials, although some rocks may contain only a single mineral. Classifying Rocks - . 6.e.2.1 summarize the structure of the earth , including the layers, the mantle and core based on

Classifying Rocks - . which is it?. metamorphic stripes or bands of color same colored crystal mica flakes (gold or

Classifying Rocks - . after this lesson you will be able to explain how geologists classify rocks. vocabulary .

Classifying Rocks - . ch 3 prentice hall p. 74-77. rocks. are made of mixtures of minerals and other materials,