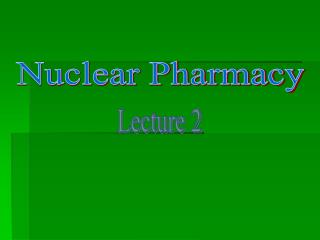 RESPONSE TO NATIONAL GUIDANCE: Information on chemotherapy use... ... How can pharmacy collect better data? - Calum

Nuclear Chemistry - . nuclear medicine. nuclear radiation can be used to visualize or test structures in your body to see